Get insights on energy efficiency in China

back to Policies & Measures

Chinese central government invested more than 30 billion RMB to subsidize energy efficient products. A wide range of product categories is covered: Not only household appliances and lamps but also cars and industrial equipment. The subsidy criteria are based on the energy performance. The additional costs between an energy-efficient model and an inefficient one is determined and taken as the subsidized amount to remove the purchase barrier for expensive products.

With China’s fast urbanization and increasing deployment of electrical appliances, the share of residential electricity consumption over total electricity consumption went up from 3.5 % in 1980 to 12.5 % in 2012. Given the continuing trend in middle class growth, the residential electricity consumption in China will remain high in the coming years. Additionally, China has become a global player and produces a large amount of home appliances for the whole world. A report has illustrated that the nation's production capacity of televisions accounted for 80% of the world's total. The production capacity of air-conditioners, refrigerators and washing machines also accounted for 70%, 50% and 40%, respectively.
Appliance consume considerable energy (mainly electricity). That is why the government decided to address energy efficient product as a cost-effective option to save energy and reduce emissions. The subsidy scheme is recognized as a national policy in combating climate change. A strong political commitment has led to a series of policy initiatives within the so-called “Jienenghuimin” program (a program to promote energy-efficient products for the benefit of the people). The aim is to stimulate the demand for products and to drive market transformation towards higher energy efficiency.
Based on a series of important decisions (Guofa [2006] No.28 and Guofa [2008] No.23, see Table 1) made by the State Council, the “Jienenghuimin” project was initiated in June 2009. From this time, a series of implementing regulations were published and implemented to distribute subsidies for products, starting with air conditioners. Not only household appliances and cars but also industrial equipment such as electric motors and air compressors are subsidized by this program.

China implemented several other financial incentives to increase the energy efficiency of energy using products. One policy is named "appliance to rural area" and supports consumers from rural area which have a lower income. This policy also set energy efficiency criteria.
At local level, for example, in Beijing , the city implemented a subsidy program for household appliances The subsidy was combined with a replacement programme of old appliances. It is also based on national energy label scheme.
On bigee.net you can find several other good practice financial incentives programmes, e.g. from Italy, the Netherlands, Brazil and Cuba.

In China, with the fast urbanization and the development of electric appliances, the share of residential electricity consumption over total electricity consumption went up from 3,5% in 1980 to 12,5% in 2012. Given the continuing trend in middle class growth, the residential electricity consumption in China will remain high in the next years.
Furthermore, the sales figures of household appliances are increasing in recent year in China, but the market penetration of high energy efficiency products only accounts for 5% to 15% of the market share. Taking fixed speed air conditioner for example, the high efficient air conditioner had a market share of only 5% before the policy came into force.
This policy tries to improve the energy efficiency of household appliances and boost the MEPS to new level.

Industrial equipment like electric motors and air compressors are also addressed by the policy. However, the industry sector and the transport sector are outside the scope of bigEE (for policies and measures).

There are different energy efficiency requirements for each product group. One example is refrigerators. The detailed subsidy scheme is shown in the next table:

The interaction between the MEPS, the voluntary label, the mandatory label and the subsidy scheme is innovative.

The subsidy program is not a long term policy as the government cannot allocate huge financial support for long time. This time limit could be improved to increase the effectiveness of the policy.
Another barrier are the minimum requirements to receive funding. E.g. more than 70% of all refrigerators have a high energy efficiency rating and are eligible for the subsidy scheme. This shows that the scheme could be more stringent.
In addition, some low energy efficiency technologies such as plasma TV should be kicked out of the program. The subsidy program should also set size cap to prevent the purchase of over-sized products. The bigger the size the more energy is used. The over-sized products should not be subsidized.
An exemplary 80 inched LCD TV has the price of 69,999 RMB. However, it still can get the subsidy of 400 RMB. The efficiency of this TV might be sufficient for the subsidy program, but the absolute power is very high. Not only efficiency, but also sufficiency should be considered in the policy.

Funding
Funding comes from the government. From June 2012, 26.5 billion RMB public funding was budgeted for this subsidy program. The foci of the program are TVs, air conditioners, refrigerators, washing machines and water heaters.

Test procedures
National standards are used for this program.

Other pre-conditions
The energy label is needed for the policy as well as a functioning supervision mechanism.

The subsidies are given to the retailers by the central government. The participating actors have to be registered and have to accept the implementing rules.
The retailer pays customers cash first (except cars) and they can only get the subsidy back from the government when specific requirements are fulfilled: A certain amount of registered models were sold, all procedures are proper and they pass the monitoring inspections.
The energy efficient appliances are defined in national standards which are also the minimum requirements for the voluntary endorsement label. Furthermore, the products eligible for the subsidy also have an energy efficiency ranking of 1 or 2 within the mandatory energy label.

Monitoring
MOF conducts a regular monitoring of the policy.

Evaluation
An official evaluation of the policy is not available.

The following barriers have been experienced during the implementation of the policy
The subsidy program is not a long-term policy as the government cannot allocate huge financial support for long time.
The effectiveness of the policy could be improved. Subsidies should only be given to the top-efficient products (following the rules of efficiency and sufficiency); i.e. no wrong signal should be given to consumers to get the maximum subsidy. Subsidies should go to small and medium sized products.
Furthermore, some products are made artificially expensive to profit from affluent consumers. Subsidies should not be given to retailers but to end-users directly.
Enforcement and monitoring activities should be strengthened.

Find out the potential impacts of this good practice policy example alongside energy savings and cost effectiveness.
Achieved energy savings

There is no comprehensive energy saving evaluation.
Until the end of 2010, 34 million fixed speed air conditioner, more than 1 million cars and 360 million compact fluorescent lamps were subsidized. The estimated energy saving is 22.5 TWh/year and 14 million tons of CO2.
From June to December 2009, 4.2 million fixed speed air conditioners were subsidized. The 6 month sales was 3 times as high as the sales of the whole year 2008 (the market share was increased from 5% to 70% by the end of 2010). It was estimated that those air conditioners could reach the energy saving of 1 TWh/year.

According to a consumer survey conducted by CLASP in May 2013, 62% of 15,002 interviewees knew this subsidy scheme. However, in the 2,630 full samples, 10% of all knew all the subsidized product categories, 38% of all knew the subsidy criteria of one product and 39% did not know the subsidy criteria at all. 75% of all full samples purchased household appliances in past 6 months and the rest had the plan to buy appliances in next 3 months. Among the 75% buyers (1968), 76% of them got the subsidy. This survey showed that this subsidy program has very wide coverage in urban area. This survey also disclosed that the subsidy amount plays important role in affecting the purchasing decision, which is also a key in policy development. 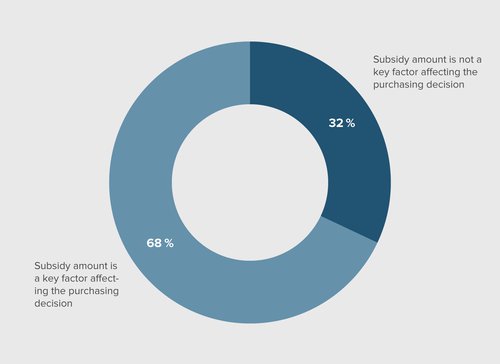 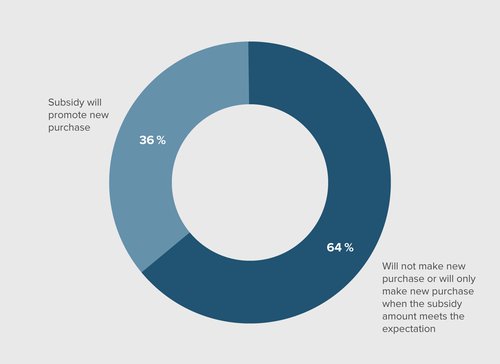 From June 2012, 25.5 billion public funding was budgeted for this subsidy program.

We would like to thank the following people for their contributions to this article
Zeng Lei, Li Jiayang