back to Policies & Measures

The Residential Mass Rollout Programme (RMR) operating between 2012 and 2014 was a strategic component of South Africa’s national utility Eskom to lower overall energy demand and peak demand, in particular. This was to be realised by distributing energy-efficient building equipment to the residential sector through selected private companies, which pay upfront for equipment and installation works and are reimbursed by Eskom.
In several ways, the RMR design stands out from other energy saving measures. Among other things, it offers the opportunity to reach a large target group and thereby may generate spill-over effects such as a more rational use of energy. Second, by using a wider range of products that can be installed, Eskom reduces the risk of lost opportunities. Thirdly, by selecting capable companies for respective works, Eskom increases the likelihood of proper installation ensuring that energy savings are indeed realised.

The National Energy Efficiency Strategy (NEES) issued by the South African Department of Energy (DOE) in 2005 set a national aspirational target for EE improvement of 12% by 2015 (using a 2000 baseline) to mitigate and manage overall energy demand. The NEES covers all energy using sectors and allocates a specific target for each one.
From the perspective of Eskom, South Africa’s national utility, one of the biggest challenges is electricity consumption during peak periods, which is driven by the residential sector to a substantial extent.
Eskom introduced the RMR programme to overcome this challenge by distributing and installing specific pre-approved electricity saving technologies to the residential sector. For this undertaking special installation contractors were selected. Contractors had to be in a robust financial position in order to cover installation works upfront and they had to officially register with Eskom.
Such companies were responsible for advertising the programme in certain areas and, if households showed interest in new energy saving technologies, companies would carry out the exchange of equipment guaranteeing the proper installation. Energy savings were ensured by the installation of pre-approved technologies. Companies had to document and report their work to Eskom and were, then, reimbursed by the utility.
The technologies which were included in the programme were compact fluorescent lightbulbs, LED downlighters, electric hot water heater insulation blankets, aerated shower heads, load control devises, and pool and/or electric hot water heater timers. Targeted households could participate in the programme at no cost (free issue) but the distributed items were limited to specific products published on a list. For RMR products, where national standards existed these would have to be met, for technology where national standards did not exist, such as LED lights, Eskom would specify minimum requirements and undertake random sampling to confirm and maintain quality. To reduce costs, the vendors would target specific neighbourhoods, having communicated in the press and other media, and go door to door offering to exchange inefficient for efficient technology. Each phase typically ran for six months and targeted 200,000 to 300,000 households.
The programme operated in phases, whereby Eskom would put out a Request for Proposal (RfP) for vendors (installers) to submit proposals. Appointed companies could use the RMR-contract to secure funding from financial institutions to pay for products and installation works upfront. Vendors had to demonstrate that the technology met certain minimum performance standards and that their pricing was market related. Priority was given to small black owned enterprises (Polity, 2012).
The RMR programme had an overall budget of R1.5 billion (EUR 120 million) and was funded from the overall Eskom “Integrated Demand Side Management Programme (IDM). M&V was conducted by the Eskom audit team and vendors were required to submit documentation, remove inefficient appliances from household for Eskom to inspect on request and conduct random spot checks.

Several countries introduced financial incentives programmes promoting energy-efficient appliances. For instance, South Africa’s RMR bears close resemblance to Cuba’s large-scale appliance replacement programme, which was part of Cuba’s “Revolución Energética.” However, some products like refrigerators were not distributed for free but the Government required households to pay for such equipment. In contrast to the completely voluntary RMR in South Africa, a forced uptake of energy-efficient appliances may have had negative implications on the acceptance of the programme.
In Germany, low-income groups can benefit from distribution of minor electricity saving equipment and a subsidy of around EUR 150 for a new, highly efficient refrigerator.
Even in South Africa, CFL or other household technology rollout programmes preceded the RMR. However, the RMR stands out for the aggressive and holistic approach adopted whereby a household can benefit materially by receiving a multitude of electricity saving technology at no cost and benefit from reduced electricity bills.

For several years, South Africa has been facing electricity supply shorTFAlls hampering its economy and the well-being of its people. From Eskom’s perspective, one of the biggest challenges is electricity consumption during peak periods. The residential sector is a significant consumer of electricity but especially during peak periods, as shown in the Figure below (Eskom 2013a).

Electricity consumption of the residental sector and other sectors 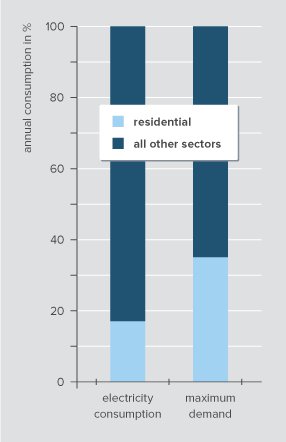 The purpose for which electricity has been consumed is illustrated in the following figure.

Average Household Electricity Usage Across the most common Appliances 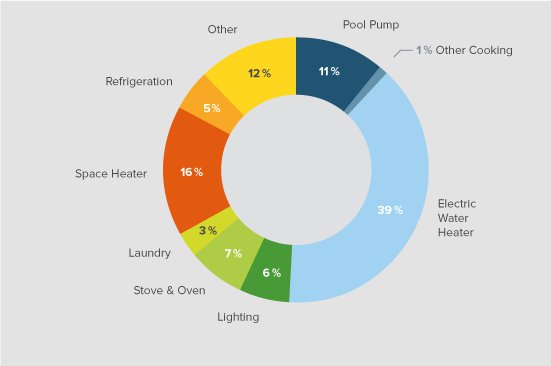 The primary objectives of the programme were:

RMR was a national energy saving measure undertaken by the national utility Eskom. However, the distribution of appliances was carried out only in selected areas and with high-income households.

The programme issues a range of pre-selected electricity savings technologies for free to households. The disposal of replaced products is also part of the RMR and prevents energy-inefficient technologies from re-entering the market.

Technologies included in the RMR programme either had to comply with energy efficiency standards or, in case standards had not been effective, Eskom introduced performance requirements. Moreover, product pricing should be market-related.
In order for households to benefit from the programme, Eskom did not establish any requirements. However, replaced technologies had to be disposed professionally. Moreover, in general, the programme rather focused on groups consuming relatively large amounts of electricity. Hence, RMR was de facto aimed at higher income groups.

The RMR programme interacts with the following national objectives:

The programme includes some innovative features. First, it does not only offer a singular appliance but a set of equipment for free. Second, even the installation of the technology provided is free. Please also note that installation contractors registered with Eskom officially safeguard that (i) the technology is installed properly and that (ii) the old technology is removed and disposed. This helps to ensure that old equipment is not used anymore and that the electricity savings are immediately realised from the utility’s perspective and assists with M&V.

A key focus was the use of small, black-owned and emerging business selling and installing building equipment. This may have increased implementation risk as the companies may not have the necessary resources (skills and capital) to implement such a large programme. However, these companies are also less likely to be affected by reputational risk issues should they under-perform as compared to large, established players.

The programme was suspended during the Round 3 selection process for vendors due to funding shorTFAlls. This created confusion in the market and did not allow RMR to leverage on the work done in the previous phases. A committed budget and time frame would be optimal.
Incorporating a feed-back loop whereby households who would like to provide feedback directly to Eskom on their experiences would provide valuable information for future iterations.

The following pre-conditions are necessary to implement the RMR Programme:
Agencies or other actors responsible for implementation
The RMR programme formed part of Eskom’s Integrated Demand Management Programme and specifically fell under its standard product offering. Eskom is the main utility in South Africa and is state-owned.

Funding
Funding for the RMR was generated through electricity tariff increase, which were proposed by Eskom and approved by regulators. While the increase was not exclusively used for the RMR, the programme was a major component. The RMR was allocated a budget of R1.5 billion and a target of 1,054 MW by January 2014.

Test procedures
All technologies had to comply with national standards and any specific technical requirements prescribed by Eskom.

Other pre-conditions
The vendors (installers) must be in good financial standing and registered with Eskom.

Eskom commissioned Frost and Sullivan (energy consultants) to undertake a study and one of the outputs was to identify the greatest electricity saving opportunities by market segment for the RMR programme. All market segments were covered but excluded CFLs from areas that had already participated in CFL rollouts (Eskom, 2013b). 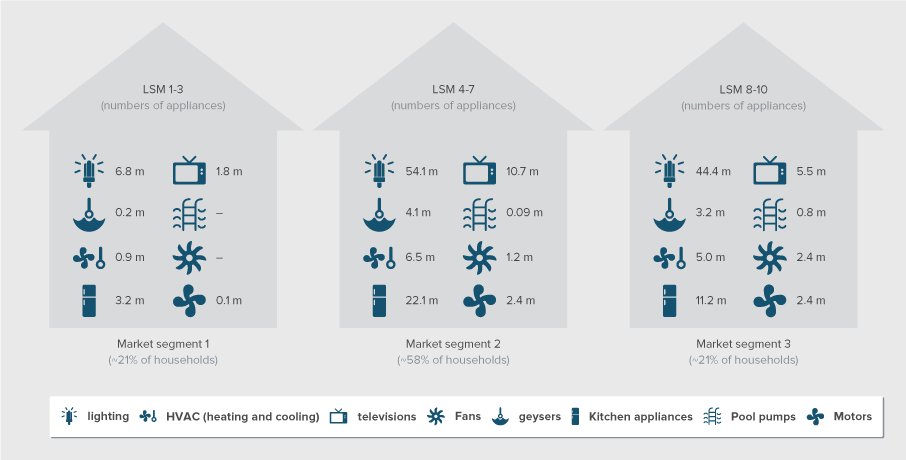 Note: LSM = Life Style Measure and broadly categorises households according to income where 1 is the lowest and 10 is the most affluent.

Claims process for RMR Programme falls under the standard product. The flow diagram below shows the project process post contract.

Quantified target
Through the RMR, Eskom had attempted to save, in total, 1,045 MW by Winter 2014. 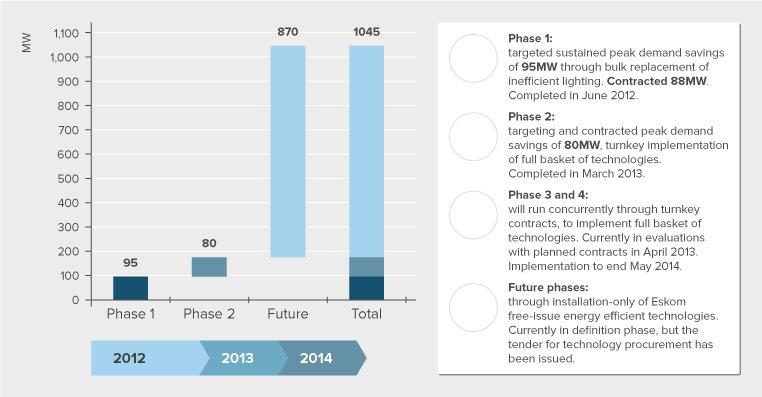 Monitoring
The programme was monitored by the Eskom IDM M&V team. Companies, which installed new equipment with households, had to report activities to Eskom in detail. 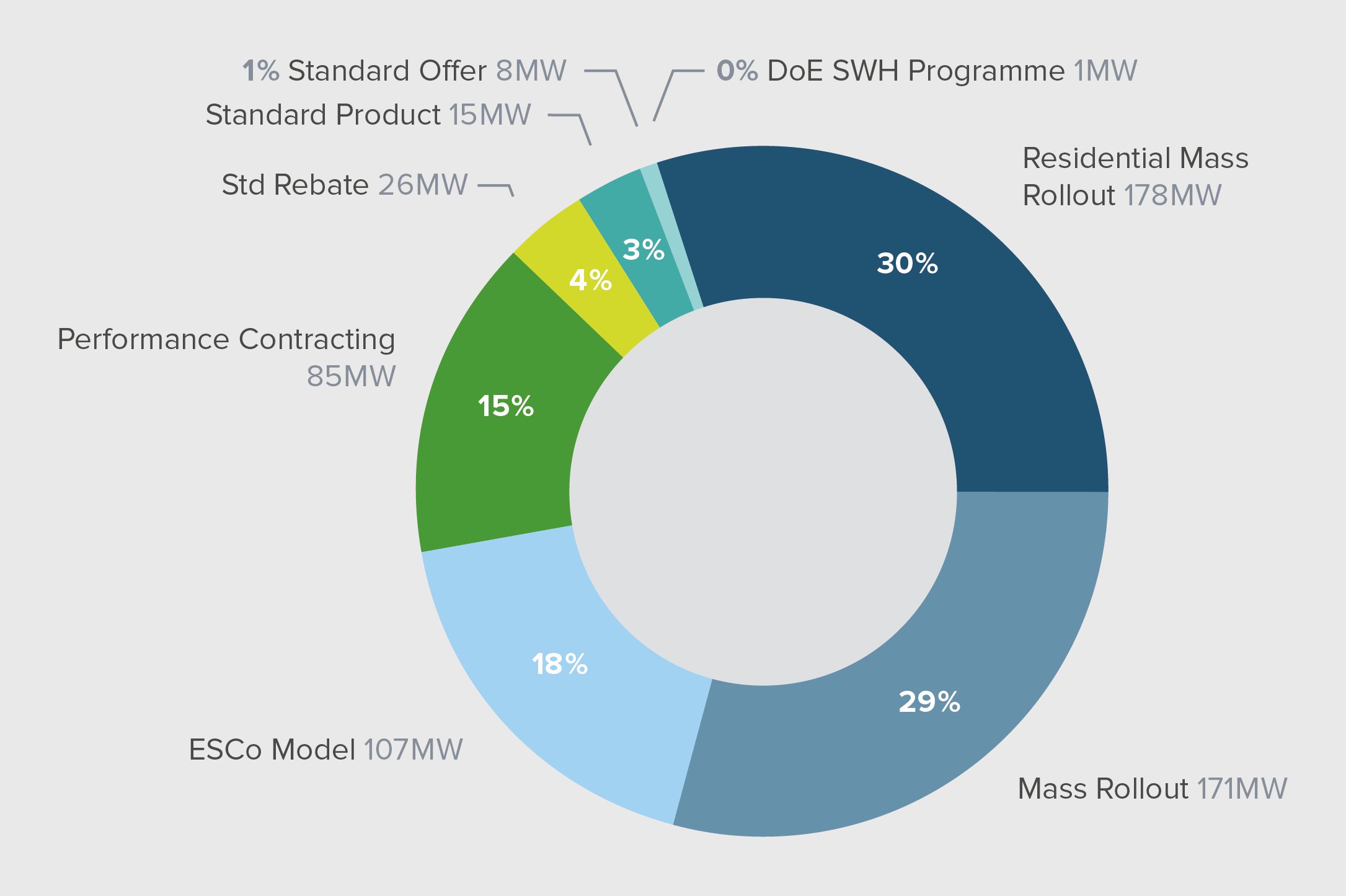 Co-benefits
Given the large scale of the programme, the RMR may have positively contributed to capacity development in the sector and created or maintained job opportunities, e.g. related to auditing, manufacturing, installation and maintenance. Moreover, the policy – due to reduced demand – has contributed to mitigating greenhouse gas emissions and resulting climate change impacts.

The programme was suspended in 2014 so it is unclear what steps were to be implemented to overcome the above-mentioned barriers.

The programme was evaluated by the Eskom M&V team based on the contractual arrangement with the vendors.

Eskom stated the programme was cost-effective but the suspension of the programme resulted in no additional analysis or reporting.