The Italian government introduced a tax rebate scheme if consumers buy refrigerators or freezers, which have an EU energy label class A+ or A++, while verifying the disposal of the old appliance. The policy was effective from 2007 until the end of 2010. In the first seven months the sales for the top labelled product groups increased by 28% to a market share of 67%. Between 2005 and 2010 in Italy, the average new appliance’s annual energy consumption dropped 11% points to 255 KWh per year.

In 2006, the Italian parliament passed a Budget Law for the resulting years by stipulating, inter alia, financial support for energy-efficient refrigerators, freezers or combinations thereof which corresponded with the European Union (EU) energy label classes A+ or A++. Consumers received a 20% reduction in the product price and up to a maximum of € 200 if the disposal of their redundant and less energy-efficient domestic cooling appliances could be verified. Thus, this policy aimed at reducing the energy consumption of the residential sector by financially incentivising the replacement of energy wasting appliances. The next table shows the principle of the programme and the possible tax rebates.

The reduction of the product price (i.e. the 20% reduction) was provided via tax deductions, which were financed by taxpayer’s money. To receive the rebate, the customer had to verify the purchase of a new A+ or A++ labelled cooling device and the approved disposal of the old appliance. The structure of the credit scheme is illustrated in the next figure.

Structure of the credit scheme

The European energy label, which classifies appliances, was essential to this tax deduction policy. It signalled to customers directly which appliances were subject to funding.
According to BIO IS et al. (2008), the sales of A+ and A++ refrigerators, freezers and their combinations were responsible for 67% of total sales of such equipment in the first seven months after the policy’s initiation. Compared to 2006, sales increased by 28% (BIO IS et al. 2008, p.99). Between 2005 and 2010 in Italy, the average new appliance’s annual energy consumption dropped 11% points to 255 KWh per year (GfK 2011, p.6). While the costs for the government were estimated to be between €90 million and €130 million, the policy reduced energy consumption by 43.6 GWh and 27.7 kt CO2 (BIO IS et al. 2008, p.99).

Several countries established financial incentives to increase the energy efficiency of appliances, especially of refrigerators and freezers. Some examples:
The Netherlands implemented a programme called “Energiepremieregeling” from 1999 to 2003. This programme offered cash rebates for the purchase of higher energy-efficient appliances. Another completed programme came from Hungary. In 2009 they provided a maximum incentive of 60,000 HUF (€190) for new A-labelled appliances and a maximum of 70,000 HUF (€222) for new refrigerators with either an A+ or A++ label (MURE p. 1).

Energy efficiency is a policy priority in Italy. The Italian Administration has implemented some energy efficiency policies. The Budget Laws of 2007 and 2008 underpins the priority of this topic (IEA 2009). The Italian authorities identified highly energy-efficient appliances and lamps as the prime drivers to save energy.
Since the beginning of the 1990s, the significance of the domestic appliance industry market has increased in Italy. The sector’s turnover has more than doubled from € 4469 million in 1990 to € 9371 million in 2004.
Energy saving policies are crucial to Italy as it has been highly import dependent on energy sources ever since with a tendency of increasing electricity dependency which is at around 15.4%. Only small EU-countries like Malta, Luxembourg and Cyprus are more dependent on energy imports than Italy (Eurostat 2011).
In 2004, 6.6 million refrigerators and 2.1 million freezers were manufactured, while only 2.5 million and 630,000 were bought by Italian consumers, respectively; the majority of production was exported. In monetary terms the predominant white goods were washing machines (€592 million), followed by refrigerators (€495 million), dishwashers (€122 million) and freezers (€107 million).

The policy had two objectives: To increase the energy efficiency of refrigerators and freezers and the recycling of the old appliances (end-of-life perspective). The tax credit was only delivered in the case of a replacement of the old and inefficient product.
The main objective was to phase out inefficient refrigerators and to transform the market. The policy aimed to create favourable conditions for investors to buy energy-efficient products.

The technological focus were refrigerators, freezers and combinations thereof.

The tax rebate programme directly targeted the purchase of energy-efficient refrigerators and freezers by consumers. This was also an incentive for manufacturers to invest in innovation.
The energy efficiency requirements were connected with the EU Energy label (see the next table): only appliances with a label of class A+ or A++ were eligible.

The programme was in accordance with the EU energy label. The energy label classifies a broad range of domestic appliances, including refrigerators, freezers and their combinations, into different categories (A-G). If a customer decided to buy an energy efficient appliance, the label provided information, as to whether funding was possible or not. Moreover, information about energy-efficient products is provided to the public.
Furthermore, the tax allowance policy to facilitate the replacement of inefficient equipment is part of an energy efficiency roadmap, the National Energy Efficiency Action Plan, which is based on three main pillars: industrial sector, transport sector and residential sector. The Italian government has introduced various policies to facilitate efficiency in each sector (MED 2007, p.7). One of these programmes was the tax rebate scheme for refrigerators and freezers. In addition to this, there are several other tax incentive programmes, e.g. for energy efficiency in buildings and solar water heaters and photovoltaic, also based on Budget Laws 2007 to 2010.
The interaction with the EU label and the information campaigns were planned interactions. The EU label classes were an easy means to define eligibility for the grants and hence for appliance buyers to recognise the energy-efficient models eligible for the rebate.

The tax rebate programme was combined with a recycling programme. To receive the rebate, the customer had to verify the purchase of a new A+ or A++ labelled cooling device and the disposal of the old appliance to a bonafide recycling scheme.

Young people, moving out and having their own flat were disadvantaged. Normally, this group does not own a refrigerator or freezer. As it was mandatory to verify the disposal of an old appliance, they could not access funding possibilities. In consequence, there was no incentive for this group to buy energy-efficient appliances. A tax rebate should be flexible concerning the people, who receive the rebate and complement other policies to a well-balanced policy package.
Policies should aim at the permanent market transformation, not being episodic programmes. To minimise snap-back effects, the credit should not be phased out too early, but it should be adapted to changing market conditions:
As the policy supports class A+ and better appliances equally, consumers might have felt less inclined to buy the more efficient, but also more expensive appliance. Policy could have reacted by giving higher rebates for A++ than for A+ or only supporting A++, once A+ had a high market share and a low price premium compared to A or B.

The policy package could also have been optimised.
The policy could have been combined with more comprehensive actor-specific information campaigns to inform the target groups and to make the campaign accessible to the broad public. It could also have been combined with co-operative procurement or award competitions for new appliances that are even more energy-efficient than A++ (such as the new A+++ level of the EU energy label).
Once incentive programmes have moved the market to higher energy efficiency levels, mandatory minimum energy performance requirements can remove the least energy-efficient appliances from the market. In the EU, this can only be done by EU policy (not at national level) through the Ecodesign Directive, which has recently strengthened the MEPS for refrigerators and freezers in the EU market.

The EU energy labelling scheme was an important pre-condition for the policy. A funding scheme is also necessary to realise the rebates.

Agencies or other actors responsible for implementation
In this case, the tax authorities acted as the implementing agency and the national energy agency ENEA was in charge of monitoring, so no new agency needed to be created.

Others
A labelling scheme was necessary to inform consumers about the energy class of refrigerators and freezers and combinations of the two (Terna 2008).

The Budget Law of 2007 stipulated regulation to create tax incentives for the replacement of old, inefficient freezers and refrigerators as well as other regulation to decrease GHG emissions.
The tax authorities collected applications and paid out the tax rebates. The national energy agency ENEA was in charge of monitoring.
Several manufacturers of domestic cooling appliances argued in favour of extending the policy until the end of 2010. Manufacturers of domestic washing appliances supported an expansion of the programme to clothes-washing and dish-washing machines (CECED Italia 2007). Both, extension and expansion of the rebate scheme were successfully implemented.

Co-operation of countries
The tax rebate scheme benefited from the EU energy label. The label made it easy for consumers to identify the appliances that were eligible for the rebate.

Quantified target
A quantified target exists for the overall package of measures targeting energy efficiency for refrigerators and freezers, but not for the tax rebate scheme alone.
In 2007, the Ministry of Economic Development estimated the stock of appliances (refrigerators, freezers and their combinations) to be 34.46 million consuming 13,071 GWh/ year. Projections showed that the appliance stock would rise to 35.99 million.
A BAU scenario for 2010 (Ministry of Economic Development, 2007) expected an increase in total energy consumption 13.571 GWh/year. However, with the help of efficiency improvement measures, i.e. information programmes and adoption of minimum efficiency standards along with the tax rebate scheme, these appliances were expected to use only 12,362 GWh/ year, saving 1,209 GWh/ year. The average consumption per appliance will drop from 377 kWh/year in 2010 (BAU) to 343 KWh/year.
A BAU scenario for 2016 estimates that a projected amount of 38.5 million of the appliances will use 14,554 GWh/year. But by means of using information programmes, incentives for installing high-efficiency refrigerators, incentives for early replacement of obsolete appliances and adoption of minimum efficiency standards, total consumption will be reduced to 10,697 GWh/year, i.e. savings of 3,857 GWh/year or 27% vs. BAU. With the help of energy saving measures, the mean energy consumption is estimated to decrease to 277 kWh/year (Ministry of Economic Development 2007, p.28).

Actors responsible for design
The initiator of the programme was the Italian government. They were supported by the Italian branch of the European Committee of Domestic Equipment Manufacturers, CECED.

Monitoring
The tax rebate was monitored by ENEA. This means that the results are documented in terms of costs, savings and number of measures (IEA 2009).

Evaluation
BIO IS et al. undertook a basic impact assessment based on data from the CECED Italia. However, this information was not available for this description.
The market share of domestic refrigeration appliances was recorded.
Economic benefits have not been evaluated.

The tax rebate was coupled to the proof of sending an old appliance to bonafide recycling, so the scheme aimed at recovery of used material as well as cooling and foaming agents that can contribute to global warming.

In 2007, 34.49 million domestic cooling appliances consumed 13,071 GWh/year.
For 2010, the stock of appliances was estimated to be at 35.99 million. A BAU scenario expected the energy consumption to be at around 13,571 GWh/year, i.e. 377.1 kWh/year/appliance.
With the help of efficiency improvement measures (information programmes, adoption of minimum efficiency standards), reduction of the total energy consumption was assumed at 12,362 GWh/year or 343.5 kWh/year/appliance therefore saving 1,209 GWh/year compared to the BAU scenario for the same period.
A 2016-BAU scenario estimated the domestic cooling appliance stock to be about 38.5 million using 14,554 GWh/year or 378.4 kWh/year/appliance.
However, utilising information programmes, incentives for installing high-efficiency appliances, incentives for early replacement of obsolete appliances and adoption of minimum efficiency standards, scenarios calculated a total consumption of only 10,697 GWh/year and 277.8 kWh/year/appliance. In comparison to the 2016-BAU scenario 3,857 GWh/year could be saved (MED 2007, p.28).

Development of cooling appliances in Italy 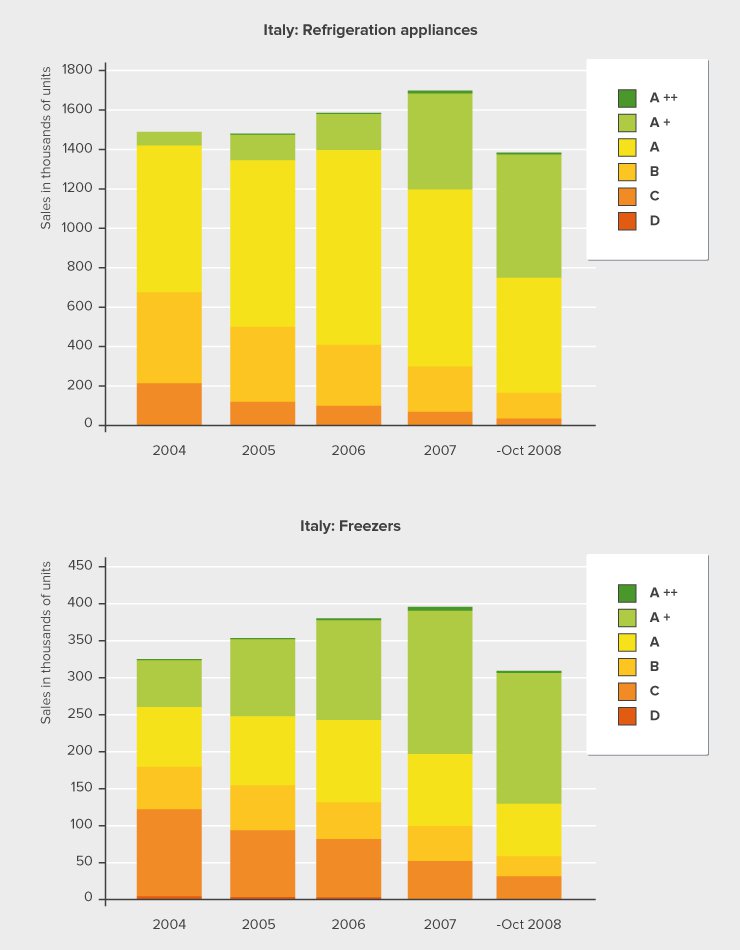