Programme for the promotion of solar water heaters in Tunisia (PROSOL)

PROSOL (Programme de promotion des CES, promotion programme for SWH) is a programme for the development of the Tunisian solar water heater industry in order to replace fossil energies, in particular liquid petroleum gas (LPG), which is highly subsidised by the government. The programme includes several incentives for suppliers as well as for residential households as end-users.
In the case of suppliers, PROSOL provides a VAT exemption for finished or semi-finished products and raw materials, as well as from customs duties, as they are deemed as imported products or raw materials. Additionally, there is a top-down and bottom-up quality assurance system for suppliers and their products marketed within the programme framework to ensure aftersales service and improve the public image of the solar water heater.
Regarding the end-users, PROSOL includes the provision of a direct public subsidy for buying a solar water heater. Furthermore, for the remaining costs of the solar water heater, approximately 80%, PROSOL provides direct and simplified access to bank financing with credit recovery over 5 years via the electricity bill.

Summary
Since 2005, the Tunisian Government has put in place the solar water heater (SWH) promotion programme in Tunisia to ensure a wide availability of SWHs in view of the rise of fossil energy prices and the increasing commitment to fight against climatic change.
The programme is built on a financial mechanism to address the following crucial issues:
The PROSOL programme was initially launched for residential housing but represents moreover an integrated solution targeted to overcome the main financial, technical and organisational barriers impeding the natural and spontaneous development of an SWH market in Tunisia. PROSOL is based on secure funding through a dedicated credit line managed by the Tunisian company for electricity and gas (STEG, a public and non-administrative company).
The PROSOL programme objective is to install 510,000 m2 of SWH in the period between 2007 and 2011 which would allow for annual energy savings of approximately 38 ktoe and 540 ktoe accumulated over the SWH life cycle of 15 years. By the end of 2010 PROSOL was authorized to install 380,000 m² and will thus save about 28 ktoe per year as from 2011 onwards, i.e. around 400 ktoe over the SWH life cycle.
This would reduce the global indicator (installed m2 per 1000 inhabitants) to approximately 50 m2 per 1,000 inhabitants in 2011 in comparison to 12 m²/per 1,000 inhabitants in 2004.
The impact of PROSOL on the SWH market development by end of 2010 is indicated under Figure 1. PROSOL has in particular allowed for:
PROSOL should be extended to a second phase (2012 - 2015) targeting to achieve 1 million m² by end of 2015, equalling 92 m² per 1000 inhabitants.
Mechanism of Prosol 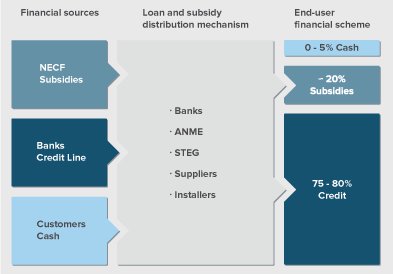 Success factors
The PROSOL programme is implemented by the National Agency for Energy Conservation (ANME), reacting on “supply and demand” by offering packages and individual elements based on the following success factors: The political will to promote water solar heating which is revealed by the involvement of the public Tunisian company for electricity and gas (STEG) in the funding of the SWH, direct support from the National fund for energy management (FNME) and the tax benefits for solar water heater (SWH) import and manufacturing.
Further success factors are:


To find more examples please check out the following databases

Find essential basics on this good practice policy example and explore how this example was applied
Situation at outset
The SWH market in Tunisia was adversely influenced by the following two main factors:
In 1988 there was an annual SWH installation volume of 5,500 m². Due to a lack of technical proficiency and quality assurance the consumer lost their entire confidence in SWH.
In the middle of the nineties the SWH had almost vanished. In 1995, the Tunisian Government made an attempt to revive the market and launched an ambitious programme planning to distribute 50,000 m² by 2003, which was supported by funding from the GEF (Global Environment Facility).
This project has given fresh impetus to the market, re-established the image of solar technology and set up a small core of local players.
The GEF project was stopped at the end of 2001 with subsidy funds depleted (6.6 million USD), even though no further measures had been initiated to replace the GEF incentives. Ever since, the SWH dissemination has drastically declined from around 17,000 m² in 2001 to approximately 7,500 m² in 2004, especially due to a lack of clear political vision for this sector from the public authorities.

PROSOL provides an integrated solution, trying to lift the main barriers the SWH market development is facing in financial, technical and organisational aspects. An integrated funding mechanism was implemented based on a financial scheme tailor-made to the needs of the consumer and the Tunisian market. For a flexible bonus and credit handling, ANME and STEG directly channel the funds to the suppliers’ accounts.

The Policy is located on the national governance level.

The programme is laid out to replace fossil energies, and in particular liquid petroleum gas (LPG) which is highly subsidized by the Tunisian Government with the objective of reducing government subsidies, save energy and increase the energy independence of the country.

Based on a penetration rate of 500 m² per 1,000 inhabitants, the solar energy potentially used for water heating is estimated at around 5 million SWH m².

Policy package
PROSOL interacts with the following programmes and measures:

The PROSOL programme is engineered in an integrated and innovative way on a multi-player basis entailing a sustainable development impact (economic, social and environmental).

The PROSOL programme is rooted on long-lasting financial resources allowing for a shift of subsidies from LPG to SWH targeted to energy savings for the government and the consumer (win-win approach).
PROSOL is an integrated multi-player mechanism laid out to overcome any barriers encountered at the large-scale distribution of SWH (first funding mechanism in Tunisia). The SWH market has allowed for the creation of new jobs to develop the industrial fabric.
The PROSOL programme has been rolled out like a project to fight climatic change and developed like a programmatic CDM (registered by the CDM EB in July 2011).

Agencies or other actors responsible for implementation
ANME is responsible for the roll-out, follow-up and monitoring of the proper programme implementation. ANME is also in charge of the FNME management and granting subsidies to suppliers;
STEG ensures the channelling of credits to the beneficiaries and guarantees its repayment to the suppliers;
MEDREC (Mediterranean centre for renewable energies), UNEP and GIZ underpin the programme with accompanying measures and technical support.

Funding
The funds were raised from the following sources:
Test procedures
Others

Steps of design and implementation
The following assessments were made prior to the implementation of the policy:
Quantified targets

Co-operation of countries
Countries like Morocco, Jordan, Syria and Egypt have a strong interest in adapting the Tunisian experience as well as in the transfer of policies via the GIZ network.
UNEP is also committed to stimulate the solar thermal programme in South Africa (Capetown) with the Tunisian experience.

Monitoring and evaluation
Monitoring
ANME is using an information and development system for the management of PROSOL, as the programme of activities (PoA, http://www.cdmrulebook.org/452) requires the monitoring of results, i.e. energy and greenhouse gas emissions saved.

Evaluation
In 2011, ANME initiated an independent evaluation campaign for PROSOL to prepare the period after 2011.

ANME takes on the annual budget planning allowing for the provision of reserves by FNME, of credits and the tracking of the PROSOL roll-out with respect to the technical facilities installed, to the amount of energy and subsidies that could be saved.

PROSOL had helped to save 26 ktoe of energy by the end of 2010. PROSOL should allow for saving 25m TND state subsidies for fossil energies and to generate a profit of around 30m TND (subsidy and energy savings) for the community.
PROSOL has also created jobs (1,500 minimum) and an industrial added value, which may position Tunisia as an SWH producing country. Based on a comparison with similar countries, the employability factor of the SWH field is evaluated at around 15 to 20 jobs per permanent volume of 1,000 m²/year.

The SWH costs for 200 litres amount to approximately 1,350 TND on average. The SWH purchased in the PROSOL frame brings about the benefit of a 200 TND subsidy, and the end-user can apply for a credit of 1,150 TND from STEG. In this case, the consumer needs to repay 22,416 TND per month over a period of 60 months, which corresponds to the principal amount and interest of the credit (MMR + 1.2). The consumer does not have to bear the initial costs (35,400 TND) as application fee to STEG.
The overall PROSOL roll-out costs for the period of 2007 to 2010 amount to 150m TND. Approximately 30m TND are funded by the FNME as subsidy to the end-user, the remaining 120m TND are borne by the end-user (around 20% cash payment and 80% via STEG credit).
The credit terms and conditions are subject to a convention between STEG and Attijari bank and are set forth as follows:

For the period from 2007 to 2011, PROSOL has contributed to energy savings of approximately 33 ktoe and thus allowed to save around 25m TND state subsidies for oil-based products. The overall net profit for the community is calculated at around 30m TND, resulting from the saved energy and subsidies. This could be achieved thanks to approximately 50m TND bonus payments provided by FNME. On the whole, the ROI period for the state subsidies amounts to around 2 years.
With its low two year ROI period, PROSOL is a highly profitable operation not just for the state, but also for the end-user.
These profits neither include the additional revenues of the CDM nor are they comprised in the SWH funding; they are exclusively used for improving the product and service quality.

Achieved cost savings
The unique post-evaluation of the programme is under way – carried out by ANME – the results should be available during the course of 2012. However, PROSOL has allowed for: