With simple but targeted communication measures, such as posters, bi-weekly intranet prompts, workshops, competitions and action weeks, just to name a few, the Mission E campaign has triggered significant changes in user behaviour and achieved energy savings in the range of 1% of the baseline consumption per year in the German armed forces. It is available also for other organisations.

Summary
Commercial for the Energy Quiz “Everybody’s Asked. – Smart Minds save energy and win with the Energy Quiz.”; Main prizes: a 7-day holiday or a notebook 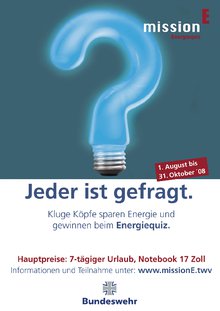 Mission E – with the “E” standing for energy, efficiency, energy savings, emissions, and engagement (commitment) – is an information and motivation campaign for internal application in companies or public administrations aiming at raising energy awareness and promoting energy-efficient user behaviour among their employees. The concept for MissionE was developed by the Energy Agency of North Rhine-Westphalia (a German Federal State) and has been implemented as a pilot test within the German armed forces since October 2006.
Distinguishing it from other typical information activities, the campaign is not addressed widely to the general public but designed to be implemented internally in a company, administration or other sort of organisation. This means that a large, yet closed group of people are confronted all at the same time, and with a certain frequency, with information that is explicitly targeted at their specific work environment. Such campaigns are therefore more likely to create significant momentum towards energy saving within the addressed circle of employees than can be expected from any “general” information campaign.
An important role in this context was the use of the armed forces’ intranet, where, among other things, a series of energy saving tips were published on a regular basis (every other week for one year). These tips are phrased as multiple-choice questions, i.e. they have an interactive element, and they also take up common misperceptions of and reservations against energy efficiency – both seem elements that contribute to an increased and more sustainable awareness-raising effect.
Here’s another example of how simple no-cost behavioural measures, such as switching off computer screens during lunch breaks, were effectively promoted: to achieve maximum awareness and compliance, a screen saver saying “Please switch off your screen when leaving your workstation” was installed at all stations.
The campaign concept has received international recognition and won several awards, e.g. it was selected by the German Energy Agency (dena) as a good practice example recommended for replication in 2010, and was nominated for the Sustainable Energy Europe Award 2009 by the European Commission. As a result of this and the impressive results achieved, the US Pentagon was considering the replication of the campaign. In Germany, several other companies and municipal administrations have also adopted the concept and achieved similar or even better results with it: for instance, the local administration of the City of Dortmund started their Mission E in 2009 and managed to reduce their overall energy consumption by 1.66% in 2009 and 2.2% in 2010 respectively (Städtische Immobilienwirtschaft 2011).
For the German armed forces, by the way, Mission E is only one element of their wider energy management activities. Overall, the armed forces achieved more than 21 % of energy savings from 2006 to 2010. 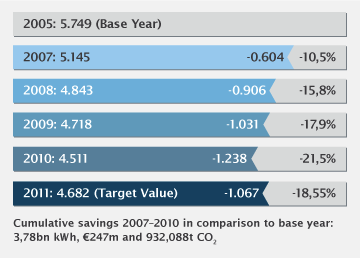 Source: Energie.Agentur NRW, based on data from Bundesamt für Wehrverwaltung

In the USA, the Green the Capitol programme aimed at making the U.S. parliament as well as other affiliated buildings “carbon neutral within 18 months [and] reducing energy use by 50% in ten years.” Among other things behaviour change of the facility management staff was one important component. Carpooling, commuting by bicycle and recycling were promoted (ACEEE 2012, p. 4).
In Canada, in 2008, the Ministry of Energy, Mines and Petroleum Resources developed the “employee engagement initiatives to build a culture of energy conservation.” For example, the programme consisted of a “Green Team” that was to identify energy saving opportunities within the Ministry (ACEEE 2012, p. 8).

In 2005, i.e. before the start of Mission E, the energy consumption of the military was 4.7 billion kWh of heat and 1.3 billion kWh of electric energy, which is roughly equivalent to the annual consumption of a medium-sized city with 300,000 inhabitants. Energy costs were at roughly EUR 380 million in 2006. The corresponding CO2 emissions were about 2 million tonnes per year (BAWV NA).

Mission E aims at changing the energy-using behaviour of employees. Information and awareness-raising campaigns via leaflets, posters and the intranet reach out to a large number of employees. Seminars and workshops are also offered in order to create multiplier effects.

The campaign was launched in the public sector, with the German military, in particular. However, it can be replicated in every governmental or non-governmental organisation, though, from the economic perspective, the development of some instruments such as seminars or workshops makes only sense in large organisations.

Due to the design of Mission E, changing the energy-consuming behaviour of employees has priority. Actions such as turning down the heater while opening windows or switching off screens when leaving the office are very important.

The actions targeted by the campaign all refer to a change in energy-using behaviour and purchasing decisions. For example, the brochure “Mission E – Energy Savings Manual” gives comprehensive advice in terms of:

Mission E was designed for the German military which is financed by taxpayer’s money. Thus, lower energy costs for governmental organisations can become beneficial for society as a whole, as financial resources saved can be used for other equipment or programmes of the respective organisation or for government services.

Mission E includes workshops in which employees discuss energy saving tips, energy quizzes and other informational material. A good practice and best practice competition is planned for whichever offices can apply.
Mission E has been part of the Germany National Energy Efficiency Action Plan (NEEAP) 2007 and 2011. The government is committed to reducing CO2 emissions of its operations by 30% between 2008 and 2012 compared to 1990 levels. Energy performance and supply contracting is facilitated by the German government for federal properties. In addition to that, €120m was made available in order to finance energy saving measures in buildings under the Energy Savings Programmes for Federal Properties. It works complementarily to Mission E. Moreover, the Green IT Initiative aims at reducing the energy consumed due to ICT by 40%, making use of best practices, guidelines and information exchange between federal agencies (BMWi 2011).
More concretely, the various instruments of Mission E refer to the EU energy label or the energy star, both of which also provide reliable and comparable information for purchasers of electricity-using equipment.

Mission E fully relies on voluntary behavioural changes by building users and facility management staff. If this goal is achieved at work, it is likely that employees also make use of energy saving advice at home in order to reduce energy costs. The German military has more than 300,000 civil and military staff increasing the impact of multiplier effects. The Ministry of Defence co-operates with the Energy Agency NRW in order to benefit from its expertise and to use adequate information and training material.
Other actors, e.g. local governments, have taken up the Mission E approach. The Energy Agency NRW has successfully designed a concept making Mission E applicable to municipalities and businesses, as well.

Agencies or other actors responsible for implementation
While the Energy Agency NRW designed the measure and the respective tool kit, the armed forces have been an ideal test bed for the implementation of Mission E because they have more than 300,000 employees who can save energy at the work place as well as in their private lives.

The German armed forces have more than 300,000 employees and 1,600 sites with several thousand individual buildings. In 2005, i.e. before the start of Mission E, the energy consumption of the military was 4.7 billion kWh of heat and 1.3 billion kWh of electric energy, which is roughly equivalent to the annual consumption of a medium-sized city of 300,000 inhabitants. Energy costs were at roughly EUR 380 million in 2006. The corresponding CO2 emissions were about 2 million tonnes per year (BAWV NA).
The Mission E in the armed forces was jointly implemented by the Federal Office for Defence Forces Administration (Bundesamt für Wehrverwaltung, BAWV) and the Energy Agency North Rhine Westphalia (EA NRW) and officially launched in October 2006. The declared goal was to reduce the heat and electricity consumption of the armed forces by at least 1 % per year, merely through energy-efficient user behaviour and without compromising comfort. In addition to the direct effects on the energy demand of the armed forces, the campaign was also expected to impact on the way its employees use energy at home and in private transport, thus leading to even higher savings for the economy as a whole.
The concrete activities of Mission E with a view to motivating employees to change their energy-using behaviour include information provision and awareness-raising via intranet, leaflets and posters, and organising competitions, energy quizzes, seminars or workshops.
Furthermore, so-called “action weeks” are organised at different sites, where the energy consumption is measured and employees are made aware of their power to influence it. Impressive results were achieved here, e.g. in a barracks in Bonn the consumption was decreased by 9% in an action week (BAWV NA).
Various public relations activities like press releases, public presentations at conferences and other events, etc. further complement the internal measures. These activities contribute to both internal and external image improvement and thus increase acceptance (Dena NA).

Quantified target
The target of Mission E was to annually reduce energy consumption by 1% (60 million KWh) between 2007 and 2010 compared to 2005, achieving a total of 300 million KWh/ year of energy savings. Such energy savings result in reductions of 100,000 tonnes of CO2 and €19 million per year.

Monitoring
The energy consumption of individual properties is monitored.

Evaluaion
Information with regard to economic costs is available.

The programme might suffer from low participation by building users. In order to get a large number of employees involved in saving energy, Mission E makes use of various instruments. While information material (posters, leaflets, etc.) are distributed, employees can even win prizes through quizzes. The fact that military employees are used as “photo models” for information material, increases the identification with Mission E.

It was expected that Mission E could result in energy savings of 1% per year, or a total of 5% per year until 2010.

Reducing energy consumption by 1% annually, would have resulted in reduction of about 60 million kWh per year (BAWV NV).

Through behaviour changes alone, the German armed forces were able to realise energy savings of 65.3 million kWh in 2007 (EA NRW 2009).
Energy-efficient behaviour changes resulted in a total of 1.28 billion kWh of accumulated savings between 2007 and 2010.

Through behaviour measures alone, €5.3 million in cost savings were achieved for 2007 (EA NRW 2009).
Accumulated energy savings, including Mission E and other energy efficiency measures, translated into €247 million by 2010 (EA NRW 2012).