There were an estimated 550 to 600 million DX units in the form of room air conditioners and packaged ducted air conditioners installed worldwide at the end of 2009 (IEA, 2011). Annual sales of these air conditioners were around 55 million (including reversible units) in 2009 (IEA, 2010). The best split units have a COP of around 6 compared to average sales weighted efficiencies of around 3.5 or less. In simplistic terms this equates to a potential saving of around 40%, although savings in real usage could be more or less than this when seasonal efficiencies and regional variations are taken into account. The IEA estimated global energy consumption by residential air conditioning systems (chiefly DX systems) could be reduced by approximately 877 TWh/yr by the year 2050 with stringent policy action when compared to a 2007 baseline scenario (IEA, 2011).

Volume of global air conditioner market, by product type, in millions of units 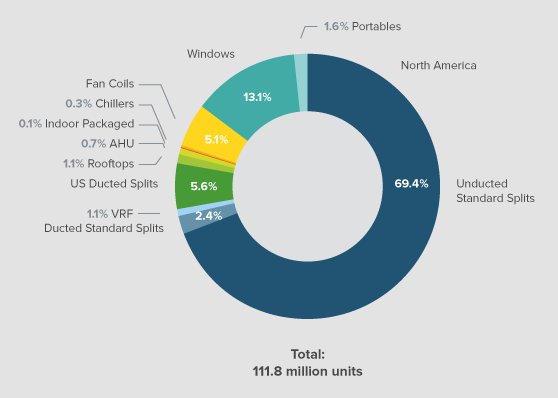 If units are grouped according to technical and performance similarity, there are four main types of vapour compression air conditioners. They are listed below in descending order of sales % (BSRIA, 2010) Non-ducted splits (single type, also called ductless mini-splits)

The market value of space cooling in 2010 was worth €46 billion (US$63 billion) and rose to about €64.3 billion (US$88.4 billion) in 2012 (BSRIA, 2012). DX air conditioners for residential and commercial use accounts for two thirds of that value. The remainder is from commercial equipment for central systems, including chillers, rooftop units; large multi split VRV/VRF (Variable Refrigerant Flow/Volume) systems, and fan coil units (see figure below).

Value of the global air conditioner market, in thousands of Euro 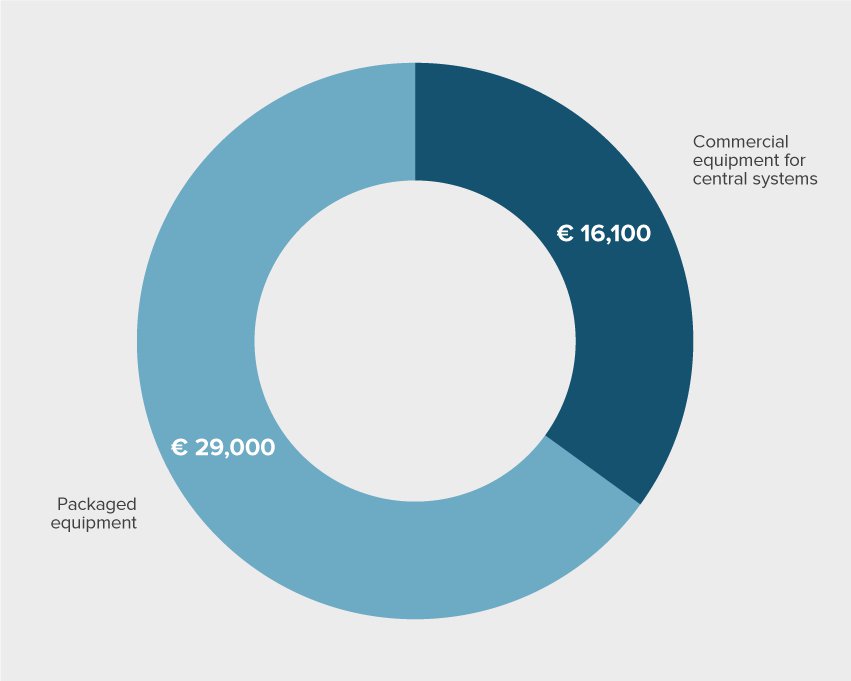 Looking at the packaged equipment market, which includes room DX AC units such as room air conditioners and packaged equipment: Split systems (including non-ducted mini-splits and multi splits, including VRFs) dominate this market with over three quarters of sales by value. Window units account for 8%; US style ducted systems account for 9% and rest of the systems to around 8 % (BSRIA, 2010) (see figure below). Total sales of all types of DX units in 2009 were estimated to be around 55 million (IEA, 2010). Ducted central systems account for over half the market in the USA, Canada and Australia. China is by far the most significant market for air conditioning globally (BSRIA, 2010). 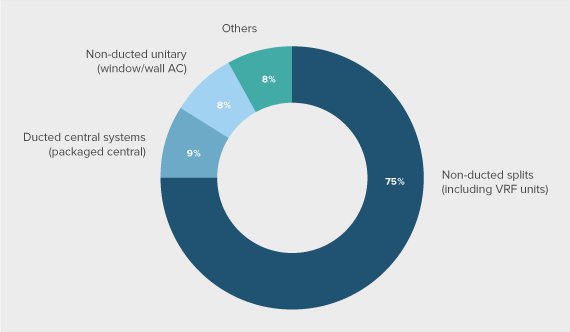 The following figure shows the growth potential for split units in various markets worldwide by volume from 2012-2015. 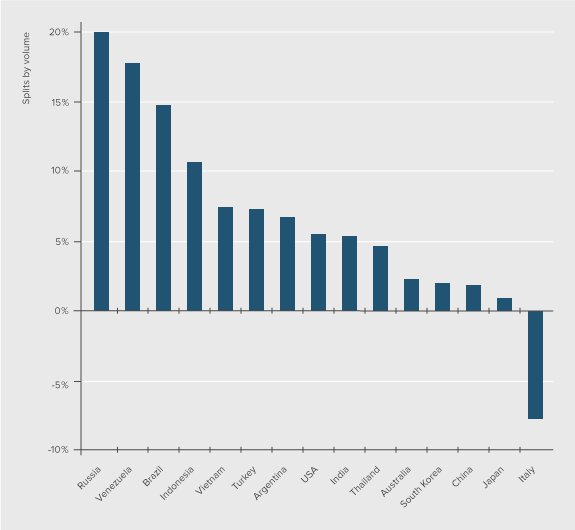 In saturated markets like that of the US and Japan, the demand is driven by factors such as replacement of older refrigerants with newer, less harmful ones, the need for energy conservation by improving the efficiency standards of existing stock, increase in technology such as smart homes etc. In other emerging markets the demand is driven the rapid construction of new buildings with the need to air conditioning (McNeil & Letschert, 2007). Here, priority for harmless refrigerants and demand for efficient equipment often take a back seat. This is where policy driven market becomes indispensible to keep a check on energy and environmental issues.