An electric chiller is a machine producing chilled water for air conditioning purposes. Chilled water is typically procured at 4 - 6 °C. It works on the principle of vapour-compression refrigeration cycle. Common refrigerants used in chillers are R 22, R 12, R 123, R 134A Ammonia. Commercially available chillers vary in capacity from 50 kW to 5 MW or even more in specialized conditions. Typical life expectancy of electrical chillers is approximately 25-30 years.

An electric chiller works on the principle of vapour compression cycle except that the equipment is more robust with a slightly different arrangement from that of a DX Air-Conditioner. Typically expansion valve, evaporator and compressor are housed together with a remote condensing unit. Unlike Window AC where air is blown from over the evaporator unit into the space to be cooled, the evaporator unit in chiller exchanges heat with water to produce chilled water through a special purpose heat exchanger. The chilled water is then supplied through out the building using insulated pipes wherever the cooling is required. The cooling distribution to the space using chilled water is done by mechanical ventilation systems. They are typically classified as either All air systems or Air water systems.

The core of any electrical chiller is its mechanical compression system (compressors) and heat rejection system (condensers).

Heat rejection system (condenser)
The central cooling systems like chillers requires a means to reject the heat it accumulates (heat of condensation). The condenser is where bulk of this heat is rejected in a vapour compression machine. Condensers in chillers have two configuration of heat rejection mechanism- air cooled and water-cooled. Air-cooled condensers reject heat from the condenser to the ambient air using special fans. They may either be remotely located or be connected with the chiller (e.g., packaged chillers). Water-cooled condensers exchange heat with water, cooled through evaporation, using special heat exchangers called cooling towers. In water cooled condensers a secondary cooling circuit using water will be used to move the heat from the condenser to the outside.

Air-cooled condensers are up to 40% less efficient compared to water-cooled condensers. However, local availability and quality of water plays an important role in deciding which condenser to use. Water consumption averages around 2 litres per kWh of cooling delivered (ARMINES, 2012). Conventional style condensers can also be assisted by the controlled spraying of water onto them to make similar savings. Cooling towers for chiller can be obtained in two different variants. 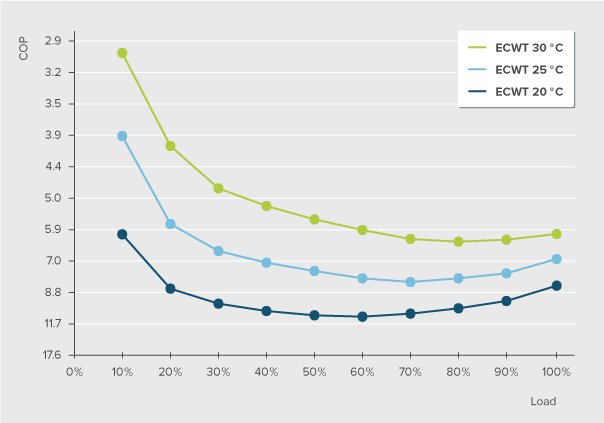 It is always important to select a chiller so that it operates at full efficiency most of the time. It is important to make sure that the chiller is always operated at optimum efficiency levels for a given load and Entering Condenser Water Temperature (ECWT). 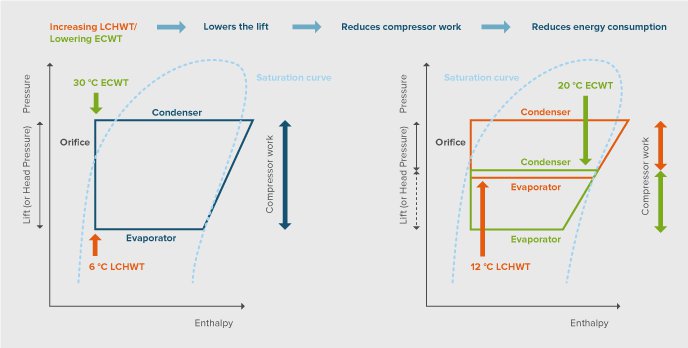 As show in the picture, lowering the Entering Condensing Water Temperature can reduce ‘lift’. Similarly, increasing the Leaving Chilled Water Temperature (i.e., decreasing the ‘load’ on the system) also reduces the lift. Lowering the lift generally increases the efficiency of the chiller (however, depending on the chiller load Vs. efficiency curve).

Improvements in chiller and cooling tower systems offer significant savings in energy consumption. Chillers with efficient compressors with magnetic levitation bearing, variable frequency drives for refrigerant flow, heat recovery chillers; improved heat exchangers are some of the best available technolo-gies in the field. Cooling towers with inverter driven multiple speed fans are much more efficient than single speed fans. Some of them are listed below.

There are several types of compressor, each suited to certain capacity ranges and types of application but with significant overlap and selecting the optimum solution is complex. However, the BAT for systems over 200 kW is generally an oil-free centrifugal compressor with magnetic levitation bearings. Cooling energy savings in the range of 30% - 50 % can be achieved by using BAT compressor compared to a typical average compressor.

Description of the technology
Three types of compressor dominate the chiller market in terms of installed capacity: scroll, screw and centrifugal. Each technology has its own size range; best suited type(s) of application and specific design features for best efficiency. Selection of the best compressor type, size and control system for each job is complex and cannot easily be generalised. This will often require a building simulation and detailed inputs about the building, local climate and likely occupation patterns.

A key efficiency improvement for any compressor is to match cooling capacity to demand. This can be achieved by various means of short-circuiting or offloading compressors, or through variable speed operation. DC brushless (permanent magnet) motors enable this, and higher motor efficiency. Other improvements include magnetic levitation bearings to reduce friction.

Savings potential
The BAT solution for larger chillers (over 200 kW) is quite clearly a centrifugal chiller with magnetic levitation bearings. The absence of an oil system also considerably improves part load performance leading to savings of between 30% and 50% over conventional chillers. 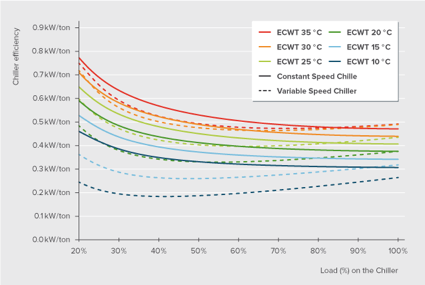 The choice of heat exchanger type for each system is a complex engineering decision depending up-on capacity, size and budget constraints amongst many others. Microchannel heat exchangers offer significant advantages for most system types, although constraints on their use exist for some applications.

Description of the technology
The type of heat exchanger used in a chiller is determined partly by the capacity but also other system constraints including available space and budget. Shell and tube evaporators dominate the larger end of the market but flat-plate heat exchangers are more compact per kilowatt. Efficiency gains have been shown for some system types, mostly small to medium size systems, through use of microchannel heat exchangers. These are particularly compact and offer advantages of better airflow, significantly higher heat transfer per unit of face area and reduced refrigerant charge. Microchannel heat exchangers offer the BAT solution for most system types but are, however, less applicable to reversible (cooling and heating) systems due to oil return issues.

Savings potential
Microchannel heat exchangers offer a 20% to 40% reduction in refrigerant charge and 10% improved performance for the same face area. Manufacturers claim that heat exchange can be delivered at lower cost than conventional approaches in many situations, although constraints on their use do exist for some applications.

Fan design and matching to applications is complex, but in general the most efficient solutions will have larger fans and variable speed drive to closely match flow with cooling demand.

Description of the technology
A key efficiency improvement is matching capacity (via air flow rate) to cooling demand using inverter driven (variable speed) fans. When less capacity is needed, very substantial energy savings can be made by reducing the fan speed. For example, a 20% reduction in rotational speed yields nearly 50% reduction in energy consumption. For the same pressure and volume, a larger diameter fan is much more efficient than a smaller one - a 10% larger diameter impeller leads to a 41% energy saving. Direct drive between motor and fan avoids the losses associated with belt or other drive types, but power losses do occur in variable speed drive units. Permanent magnet motors offer the most efficient solution.

This applies to fans on fan coil units, condensers (heat rejection equipment), air handling units, air-conditioners and cooling towers. There are very many types of fan with selection dependent upon volume of air delivered, pressure drop, physical size and budget, amongst many other aspects.

Savings potential
Variable speed fans offer around 5% savings in a typical application, but can amount to much more where multiple fans are used in high air volume (i.e. large ducted) applications. Also, optimisation can achieve more than this over a full year.

A chiller not only removes heat from the building but also a chiller compressor adds considerable heat in the process. This heat is often rejected to the atmosphere through condensers. Heat recovery double bundled chillers come with special arrangement to extract this heat rejected and put it to use at some to other point that needs heat. It acts as a combined cooling and heating equipment where there is both heating and cooling demand.

During conditions of low ambient wet-bulb temperature (approx. 10 °C) heat loads in the buildings could be met by the evaporative cooling capacity of the cooling tower. Waterside economizer enables this function by bypassing the chiller function. It is best suited for buildings operating 24/7 such as office spaces and data centres. HVAC Energy savings due to waterside economizer range between 15-40% in cold to moderate warm climates (Stein, 2009).