Through promotion of research and development activities as well as demonstration projects (RD&D), innovations in terms of technologies and design concepts are fostered. Research, development and demonstration (RD&D) is critical to drive the development of innovative building concepts, such as Low-Energy Buildings, Ultra-Low-Energy Buildings, and nearly Zero Energy or Plus-Energy Buildings, both in new build and retrofit, as well as the related technologies. This will contribute to mid-term and longer-term policy goals and help ensure that energy-efficient building concepts and technologies are ready for commercialisation in time. RD&D funding is a key driver for innovative ideas, assists the accelerated market introduction, and reduces the incremental costs of energy-efficient solutions. However, market breakthrough is often hindered by a plethora of market barriers and is thus likely to need further policy support. Through a coherent RD&D policy, governments can further capacity building of comprehensive national scientific and technological research institutions on energy efficiency (GTZ et al. 2006).

Summary
The role of research, development and demonstration (RD&D) in changing the market development towards energy-efficient buildings is unquestionable – new designs and components have played a large role in the evolution of the building sector over recent years. Moreover, the rate at which energy-efficient technologies and building components improve during the next 20-30 years will be an important determinant of whether low emission paths can be achieved in the future. New energy-efficient designs and technologies realised through RD&D can help raise the productivity and competitiveness of companies and national economies as well as create jobs by producing new solutions and products and improving production processes (GTZ 2006). In order to improve energy efficiency of buildings, sufficient investment and public RD&D funding schemes are necessary to increase and maintain the RD&D activities (Bosetti et al. 2007). According to the IEA’s definition, energy RD&D covers

Deployment is exluded in this definition (IEA 2011). RD&D activities in the buildings sector mainly focus on “developing low energy housing design, allowing for optimal heat, air and moisture flows in buildings, and optimising building envelope technologies, i.e. new insulation and building materials” (IEA 2011). To realise energy efficiency in buildings, RD&D is particularly relevant not only to make the existing buildings, building designs and components more efficient but also, more fundamentally, to innovate new ways (e.g. systems; processes; value chains) of producing and using products in a less energy-consuming way (Dormann & Holliday 2002). Business primarily drives the development of new products, but key innovations have their origin in publicly funded research.Demonstration projects are particularly important in the building sector. They provide proof that very low levels of energy consumption can be achieved in reality and can also be cost-effective, if the demonstration is well-designed. Such proof in reality is an essential argument to convince investors and supply-chain actors alike. It is therefore an important basis for the provision of information, for advice and assistance during design and construction, as well as for education and training of supply-side actors such as architects, developers, construction companies and installation contractors.The relevance of RD&D funding is already high in some countries. Nuclear technologies are a core of energy-related public RD&D spending in several countries (IEA 2007) but it remains to be seen whether (after the accident in Fukushima Daiichi) government budgets will be further increased in favour of renewable energies and energy efficiency.

Governments use different tools to support and finance energy efficiency RD&D. These tools are for example: grants, contracts, tax credits and public/private partnerships. The effects of these tools in stimulating energy efficiency vary and depend on how the research programmes are structured and targeted (IPCC 2007). For a rapid market deployment of innovative building designs and technologies, a comprehensive understanding of the stage of development of a technology and the respective political support is crucial. How the stage of RD&D is interlinked with the following consecutive stages of market development (“from niche up to mass markets”) and the respective types of policy support is summarized in the figure below (IEA 2010).

Research, development and demonstration is also relevant for the implementation of other policies and measures. In this context RD&D will be one element to prepare the next steps in raising the Minimum Energy Performance Standards (MEPS) to levels of higher energy-efficiency and is important to set energy efficiency requirements for energy labels, financial incentives etc. 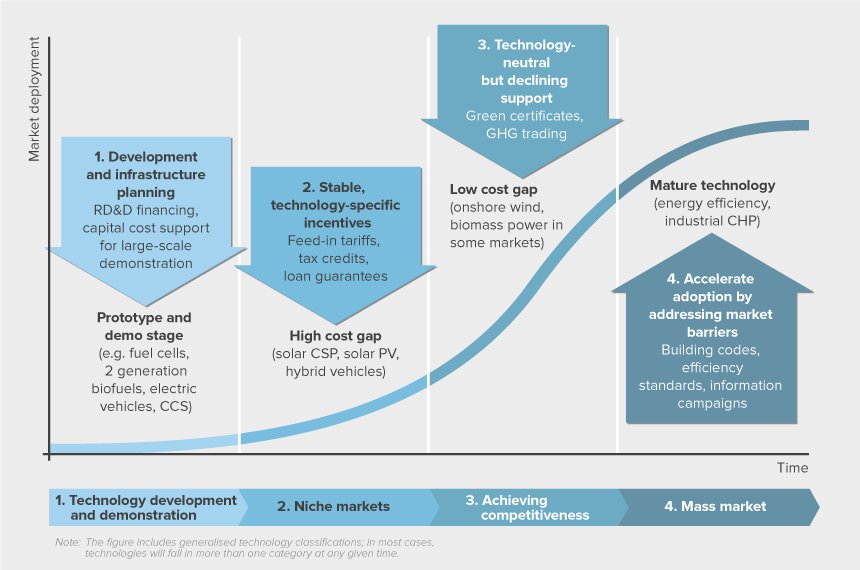 RD&D efforts try to improve energy efficiency by ensuring that energy-efficient and low greenhouse gas emitting building designs and technologies will be available in the future.
RD&D funding can be a key driver of innovative ideas, can assist the accelerated market introduction, and reduce the incremental costs of energy efficient building solutions.

Most countries have some sort of RD&D funding but the procedure, the financing and the organisation of the RD&D efforts and the funding schemes are diverse. While many countries fund research on energy efficiency, much fewer countries probably fund RD&D projects on raising building energy efficiency. Demonstration projects are also frequently used throughout the world in order to show feasibility of energy-efficient building designs and technologies.
In most cases research, development and demonstration funding schemes were introduced at national level. In some cases, research, development and demonstration funding was realised in a group of several countries (e.g. the European Union includes 27 countries).

Research, development and demonstration funding on energy efficiency in buildings can be realised with a residential, industrial, commercial or public sector focus. It depends on the focus of the RD&D programme. In principle the sectoral focus is unlimited.

As funding for energy efficiency RD&D is an instrument to achieve policy targets, a clear link to other relevant policies should be established to maximise the impact and efficiency of the RD&D activities (IEA 2007). Therefore RD&D efforts can and should be part of an effective policy package. Market breakthrough of very energy-efficient building designs and technologies is often hindered by a plethora of market barriers and thus likely to need further policy support.
Concrete policy instruments that should be integrated into an effective policy package are education and training, provision of information, energy labels, minimum energy performance standards (MEPS) and, where appropriate, financial incentives. To be effective it is essential to establish RD&D in accordance with these instruments.
Demonstration projects are particularly important in the building sector. They provide proof that very low levels of energy consumption can be achieved in reality and can also be cost-effective, if the demonstration is well-designed. Such proof in reality is an essential argument to convince investors and supply-chain actors alike. It is therefore an important basis for the provision of information, for advice and assistance during design and construction, as well as for education and training of supply-side actors such as architects, developers, construction companies and installation contractors.
Once a certain market share of highly energy efficient building technologies above a specific performance level is reached, MEPS can secure this level and the requirements for getting into the next market stage should be prepared by RD&D activities.

Pre-conditions for RD&D funding programmes are an agency or project authority and a funding scheme.

Agencies or other actors responsible for implementation
A public authority should be responsible for the assessment of RD&D proposals, their approval and for funding the research activities. It should also guarantee the financial issues and the monitoring/evaluation of the policy.

Funding
Government agencies can provide both financial and non-financial incentives to support RD&D for energy-efficiency. Different types of interventions are:

The existence of a national energy roadmap is the most important precondition for a long-term target-oriented RD&D strategy (IEA 2007). Next, a well-designed RD&D strategy with a portfolio of RD&D programmes to support energy efficiency follows. Moreover transparency and the involvement of stakeholders in defining an RD&D strategy is important (IEA 2007).
A main step is the prioritisation of different research targets and concepts. Limited resources and a multitude of opportunities requires careful attention to funding priorities harvesting comparative advantages of the specific national frame conditions and resources. The programmes should demonstrate relevance and consistency with national priorities. Innovative ideas that show promise should then be selected and funded. A monitoring of the programmes is essential to follow the development of the research activities. (IEA 2007).
Actors responsible for implementing the research, development and demonstration activities can be governmental departments, universities, research institutes, private companies, and non-governmental research bodies.

Quantified target
The policy can and should have a quantified target. The effectiveness can be evaluated through the degree to which the energy consumption of the efficient building designs and technologies subject to RD&D has been reduced by it and if they are commercialised, by the market development of the efficient building designs or technologies (number of units developed and sold).

Co-operation of countries
Enormous RD&D investments are needed to address the significant global energy challenges, while maintaining economic growth. This calls for international collaboration on RD&D.
Co-operation of countries has numerous advantages. Countries co-operate with other countries in order to “share costs, spread risks, avoid duplication, access facilities, enhance domestic capabilities, support specific economic and political objectives, harmonize standards, accelerate market learning and create goodwill” (IPCC 2007).
International collaborations can learn from an already established knowledge base and can make use of specialised expertise. Co-operations are especially helpful for countries with less experience. They have the chance to learn from other countries. In addition countries can co-operate and establish comprehensive funding schemes.
Two examples of multinational demonstration projects for energy-efficient buildings are MED-ENEC – Energy Efficiency in the Construction Sector in the Mediterranean and the demonstration programme on Zero Energy Housing by the Asia-Pacific Partnership on Clean Development and Climate.

Monitoring and evaluation of RD&D activities are essential to guarantee the success of each programme. Programmes must demonstrate importance, consistency with national priorities, and success (IEA 2007). More specific indicators of success can be whether the expected energy efficiency improvement has been achieved in an RD&D project, whether the results are reproducible by others, and whether the very energy-efficient building designs and technologies have been successfully commercialised.
Methods for evaluation are diverse and include self-evaluation as well as evaluations by external experts. Most evaluations use statistical data and interviews with stakeholders to evaluate the success of the programme and to develop recommendations for future activities (IEA 2007).

Sustainability aspects
Public RD&D funding mechanisms can include sustainability criteria as a condition to receive the funding. These aspects can be water consumption, waste reduction, use of sustainable materials or general resource efficiency and other performance characteristics.

Co-benefits
The co-benefits from RD&D funding will then depend on such criteria.

The following barriers are possible during the implementation of the policy:
Barriers for implementation are the risk of high initial costs. Furthermore difficulties in prioritisation are possible. The combination of limited resources and a multitude of opportunities requires careful attention to funding priorities (IEA 2007).

The following measures can be undertaken to overcome the barriers:
Scoping studies can assess the state of energy efficiency in buildings and the potential for improval. Priorities can be set based on such studies.

The achievable energy savings depend on the technology and the innovation potential. Therefore it is difficult to make general statements about achievable energy savings.
The effectiveness depends on consistent funding, (when building designs and technologies are developed), and the commercialisation of these energy-efficient building designs and components. RD&D may have high benefits in the long term (IPCC 2007).

The following figure shows that countries spend very different amounts on energy RD&D and that the focus of investment is broad (IEA 2010a). “On a per-capita basis, Finland, Japan and Australia spend the highest proportion (between 0.07% and 0.08% of GDP in 2008) of all IEA countries for which information is available. Overall average expenditure on energy RD&D in IEA countries is about 0.03% of GDP” (IEA 2010a, p. 7). 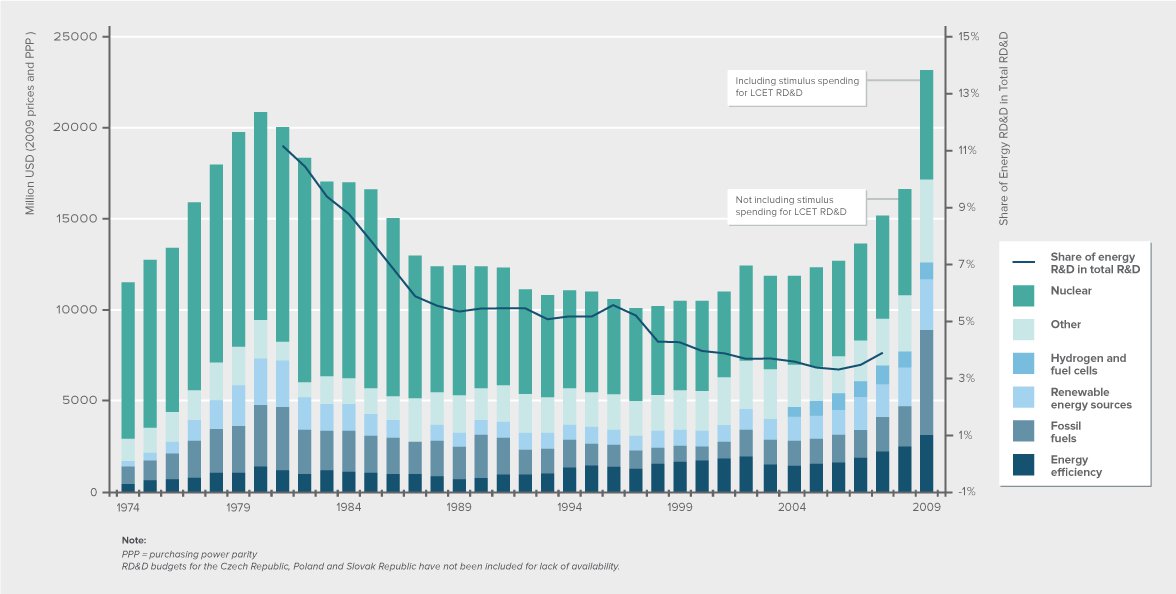 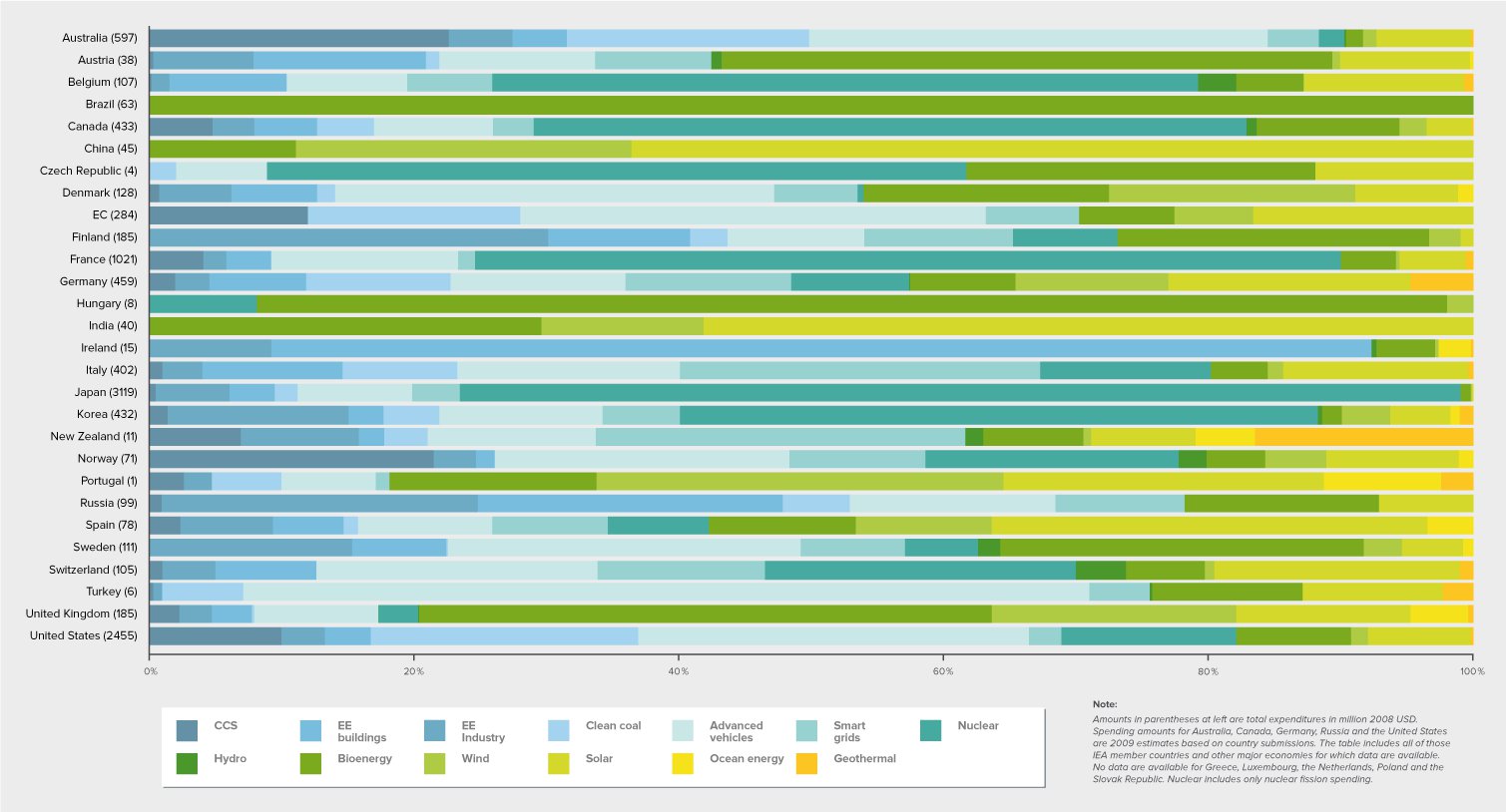