Print
back to Examples
Send us your good practice 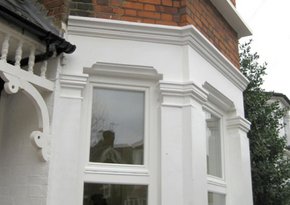 The Haringey Passive Terrace is the result of the refurbishment of two Edwardian terraced flats converted into a three-bedroom house in the London Borough of Haringey. The building is owned by Metropolitan Housing Trust and the project was funded by TSB (Technology Strategy Board) as part of a competition called Retrofit for the Future; it was completed in January 2011. The design approach concentrates on super-insulation of the building envelope and innovative building systems.

The AREE house was built in 2007/2008 to provide a showcase of a high performance building in Aqaba city in the southern part of Jordan. The total energy performance of the building was achieved through three types of measures grouped into passive design elements, material choices and renewable energy installations. The energy performance and associated costs and benefits for each type were modelled to highlight opportunities for low and high income seg-ments of the residential building market in Jordan. The building was developed by the Emtairah Consulting Corporation Amman, Jordan, and was designed by Florentine Visser, a Dutch archi-tect and consultant for sustainable designs, who specializes in hot climate areas. The project was funded by the European Union and was part of the MED-ENEC Energy Efficiency in the Construc-tion Sector in the Mediterranean. MED-ENEC pursues the aim of increased energy efficiency re-garding the construction sector in Mediterranean Countries

Although the Passive House Standard was not achieved as initially planned, the Passive Terrace achieved around 80% energy savings compared to the Reference Building. This case study demonstrates that it is possible to bring an old poorly performing house to high levels of energy efficiency.

The overall costs amounted to 225.360 €. The costs of the intervention were consistently high because the property had been badly fired damaged, so the work entailed both refurbishment and converting to one house. If this had been a “standard” refurbishment, costs would have been much lower.

This refurbishment demonstrates how a “hard-to-treat” home can be retrofitted and brought to a high level of energy efficiency. It also shows that it is possible to implement modern building systems in a period house.

The original structure is with load bearing walls. The front solid brick wall was insulated on the inside because of restraint due to the conservation area in which the house is. The insulation used is 14 cm sheep’s wool, protected by an air-tight membrane, and 6 cm thick wood fibre board, all finished with natural render. The rear wall was insulated with rigid insulation with proprietary render finish for the whole wall height; the roof edge is extended in order to accommodate the insulation thickness. The existing internal plaster was retained and repaired.
Party walls were also insulated. The original plaster was retained and repaired, the new insulation (60 mm wood fibre board) is applied above it and finished with natural render.

The ground floor is on two different levels and presents two different types of construction. In the front part of the house (upper level) the ground floor was originally a ventilated floor ; it was removed and substituted with a 15 cm concrete slab protected on top by a DPM (Damp Proof Membrane)/airthight layer with a 25 cm EPS (expanded polystyrene) insulation layer on top. Above the insulation there is a 2 cm OSB board. The lower ground floor (at the back of the house) is constituted by 15cm concrete, 6.5cm screed, 15cm Jablite insulation, 1.8cm OSB and 0.4cm rubber tiles.

The original roof ventilation system is maintained but the roof space is strongly insulated with 35 cm Warmcel or similar. There is a continuous airtight layer that connects the wall insulation and the ceiling one. The ceiling is plastered with 2 cm gypsum plaster.
Windows are triple-glazed with argon filling (U-value=0.75 W/m2K, SHGC 0.53) and timber frame. The glass Ug is 0.6 W/m2K.

As regards airtightness, a certified blower door test was done on the pre-refurbished house and after refurbishment. The results were respectively 16.5 and 2.2 resulting n50-value, demonstrating an impressive improvement. It was found that the 2.2 value could be brought further down to 1.2 if it was possible to avoid leakage where the boiler and MVHR pipework enter the building.

From outside to inside.

The house has a gas condensing boiler linked to the solar panels on the roof to provide hot water and back-up heating. There is a mechanical ventilation system with heat recovery and waste heat from the shower is also recovered.

The house was supposed not to have a conventional heating system and to be heated with the heat recovered through the ventilation system. But due to a very rigid winter the year before completion of works it was decided to provide a back-up heating via the condensing boiler and conventional radiators in the rooms. Radiators are very small though. This choice was also made because future residents expressed perplexity at not having a conventional heating system.

The house features an innovative system, Solaris by Rotex: a gas condensing boiler (natural gas fired) connected to the 8 m2 solar collectors on the roof. The boiler is mounted within a 300 litre store with a twin shell structure. The thermal store contains two heat exchangers: one used for DHW and the other is the primary heat exchanger.

Ventilation is provided via mechanical ventilation with heat recovery system with 85% heat recovery ratio. Fresh incoming air is taken from outside through an opening in the side wall and it’s warmed by the heat exchanger. The MVHR unit is in a cupboard at the ground floor.

A fully-automatic control system manages the Rotex Solaris, ensuring that each function is controlled independently of each other. The controls shall
have the ability to adjust fan speed, heat curves, stored water temperature,
legionella cycles and adjust summer/winter, night set back, hot water only, heating
only, run on timer and holiday modes.

Energy consumption data were simulated with PHPP in 2010. The building is currently under monitoring by UCL (University College London). Simulation results were as follows: