The Top Runner Approach is a standard setting tool which (at one point in time) identifies the most energy-efficient appliance of a given product category and, secondly, defines this efficiency value as the standard for the product group. Similar products have to meet this standard before a defined target year is reached and every manufacturer must comply with this standard. This approach is a potential alternative to minimum energy performance standards (MEPS). It is designed to more directly stimulate continuous technological improvements by the manufacturers of products. The Top Runner Approach can also be characterised by a continuous revision system. An effective control and enforcement regime is essential to ensure compliance with the standards.

The Top Runner Approach is a regulatory tool, which was designed and firstly implemented by the Japanese government in 1998. The underlying logic behind the Top Runner Approach is to identify the most energy-efficient technologies in the market and define their efficiency as the top runner standard (100%) from which target values are derived. Within a certain period of time manufacturers must have, at least, adopted their products (of the same category) to the target value. It is an alternative to minimum energy performance standards (MEPS). Instead of setting a minimum standard based on a technical and economic analysis, the current highest energy efficiency rate of the product is taken as a standard. The standard can be set even higher than the highest energy efficiency level, which is currently available (Bunse et al. 2007). The next figure illustrates the Japanese market development of computers to reach the top runner standard. 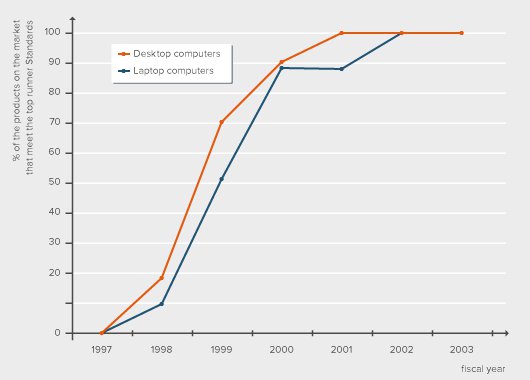 When a target year arrives, new targets are discussed to further increase the energy efficiency of the product group (Swedish Environmental Protection Agency 2005). As soon as the agency, that needs technical expertise to be in charge of the overall Top Runner process, identifies further potential to increase energy efficiency of respective appliances, it can easily tighten up standards by identifying new best-performers in terms of efficiency.
The Top Runner Approach can be used for a broad range of products but it is primary used for domestic appliances and office equipment.
Ideally, the Top Runner Approach interacts with various other policies such as a product label, which informs consumers about product achievements in comparison with the Top Runner standard. Moreover, procurement laws may support best-performers, e.g. by facilitating special contracts to them. Such a measure as well as an energy efficiency award scheme could stimulate innovation in such a way that manufacturers do not only attempt to comply with the stipulated standard. Privileged procurement contracts or awareness raising awards may unleash the innovative energies from manufacturers.
Compliance can be achieved through mandatory testing at impartial laboratories. The technique of naming-and-shaming may also function as a compliance tool. The whole process needs surveillance by a government or government-affiliated body which has sufficient technical expertise (for the specific product group). Funding must be provided by the state budget. The policy is not very expensive for the governmental budget.
Japan is the only country that has implemented the Top Runner Approach so far. Though manufacturers were sceptical at first, they now see it as a beneficial tool to compete in foreign markets such as the EU, which also has high energy performance standards for appliances.

Related appliances
Due to the limitation of bigEE, appliances (only) are considered in this section. The approach can be adapted to many other types of appliances.In Japan, the country where the Top Runner Approach was implemented, the following appliances are now covered by the Top Runner Programme:

All in all, the programme targets 23 product groups in the residential, commercial and transport sectors.

The policy works perfectly with additional instruments. For example, the Japanese government introduced the voluntary labelling scheme “e-Mark”. The label shows to what extent the appliance has achieved the energy efficiency level in comparison to the Top Runner. A green coloured label means that the standard is achieved; an orange label means that the standard is not yet achieved (Bunse et al. 2007).
An energy label is useful as consumers are rarely acquainted with all information relevant for appliance purchases.
Furthermore, financial incentives for energy efficient purchases by consumers may increase the acceptance of the Top Runner Approach as these are seen as political commitment from the manufacturer’s perspective.

Structural pre-conditions are an agency, a funding scheme and an independent test procedure.

Agencies or other actors responsible for implementation
A governmental or government-affiliated body with technical and methodological expertise is necessary to identify the top runner or best performer. Afterwards the agency is responsible for designing, implementing and monitoring the policy.

Funding
Funding needs to be safeguarded through government budgets of respective ministries. The budget has to include costs for the infrastructure (offices) and staff as well as for meetings with primary stakeholders (appliance manufacturers). Depending on the policy package, further costs (e.g. for a label, for an energy efficiency award) should be included.

Test procedure
A test procedure is necessary to calculate the standard energy consumption and to define the Top Runner energy efficiency target standards.
Testing is either done by the agency directly if sufficient technical expertise is available or may be outsourced to adequate laboratories.

The process starts with a preparatory study to analyse the technical potentials and to define the Top Runner standard. If there is hardly any product information available, the whole market (of a respective product group) needs scrutiny after it becomes clear how to measure the energy efficiency. Then, best performers or Top Runners should be identified.
From then on, respective ministries may choose an agency that is adequate in technological and methodological terms. Next will be the definition of standard test procedures for energy consumption and efficiency.
Thereafter, the government discusses the latest point in time when standards can and must be reached with manufacturers subject to future regulation. The timeframe should be challenging but not overburdening. Experts from impartial science centres should be consulted to give additional input for the feasibility.
Finally, possible sanctions for non-compliance should be discussed.
Before the policy is adopted, the agency should conduct an ex-ante impact assessment so that it is easy to keep track of successes and failures.
The policy can easily be modified. So an incentive to report failure in order to apply lessons learned (for the national policy and for foreign policy makers interested in the Top Runner approach) should be realised.

Co-operation of countries
So far only Japan have introduced the Top Runner Approach but nevertheless co-operation is possible with other countries, which plan the introduction of this policy type. Advantages and disadvantages can be exchanged to make it easier to transfer the policy in accordance with national circumstances.

Monitoring
Market monitoring should look for market penetration of energy-efficient products meeting the standard and, as well, for the penetration dynamics in order to tighten up or lessen future restrictions regarding the time a standard needs to be achieved by others. Energy agencies or research institutes can carry out monitoring activities.
Compliance monitoring is essential for the instrument to function. If a large number of products, which are not compliant with the Top Runner Standard, remain on the market, this will undermine the effectiveness of the instrument.

Evaluation
An evaluation system should also be established. Key information sources are the changes in product range suppliers, number, variety and (additional) costs of energy saving measures and the development of the market. Therefore it is essential to calculate energy but also cost savings and to evaluate barriers and incentives for future policies.

Co-benefits related to the Top Runner Programme are solely of an indirect nature. The growing share of more energy efficient devices reduces energy demands of households and thereby makes more funding available in real terms. In addition, the emissions caused by power generation and the impact of these on climate change, is reduced similar to other environmental damages. In theory, the level of benefits for the environment are controlled by the regulator as he or she can decide whether to set strict standards or less strict ones (Naturvardsverket 2005, p. 55).

In addition, the Top Runner Programme strengthens the international competitiveness of companies involved due to their improvements in terms of technology and reputation in comparison with their competitors.

An implementation barrier, which is possible during the implementation, is non-compliance by manufacturers. Therefore the goals need to be feasible in terms of technological progress within a given period of time. Additionally, sanctions for non-compliance and incentives for best performers may increase the compliance rate.

Energy savings depend on governmental ambition including sanctions and incentives for manufactures and the overall policy package. Financial incentives for consumers may increase the purchase rate of energy efficient products.
In Japan there is a broad agreement that the Top Runner Programme has been effective and exceeded the initial expectations.
The most recent publication of METI (METI 2010a) indicates that initial energy efficiency improvements for 13 product groups (including transportation) were expected to reach 35 per cent in the period from the base year to the target year (5-10 years). The effective achievements for the same period and products equated to 48 per cent and thereby outplayed estimations indicated by the Top Runner Programme (METI 2010, p. 9). (see the next table).

Regarding the budget, there is no reliable data available. However, the core policy will hardly affect the governmental budget. Note that financial incentives for purchases can massively affect this budget.
Further costs for investments in R&D will be passed on from manufacturers to consumers. However, lower energy bills will amortise higher upfront costs.

It can be expected, therefore, that the Top Runner Approach is cost-effective for end-users, policy operators and for society and can ensure low-cost energy savings. Similarly, energy resource dependent countries like Japan will benefit from fewer payments for resource imports.
Manufacturers will be more competitive in international markets, at least, if MEPS or similar Top Runner Approaches are applied elsewhere.